Bidhya Devi Bhandari and Hillary Clinton : It is a man’s world 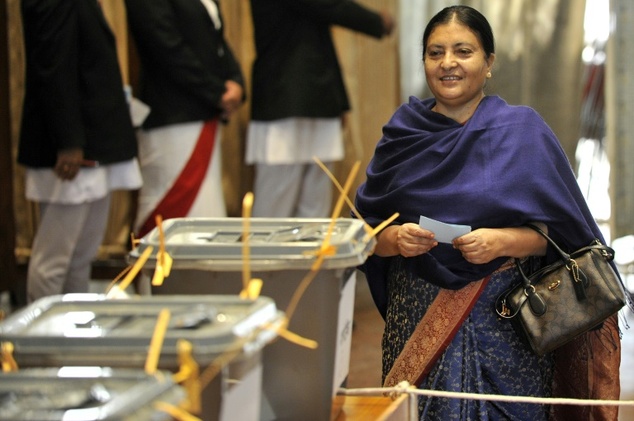 My day began with scrolling down my facebook feed. Nothing unusual there but every post seemed to be hosting a heated discussion, nothing new there either. However, what was new was that Nepal elected its first female president! That is amazing. Right ? Time will tell.

For instance, Bidhya Devi Bhandari still supports laws which discriminates women. What? A woman against another women well that is something new. It was a surprise to me when I realized she openly supports citizenship laws which were anti women. A widow herself it was a matter of amazement that she could not understand the inconvenience this form of law brought to women who were sole providers of a family.

While I was trying to calm myself from the statements made by our supposedly feminist leader, I heard a song, ” This is a man’s world, This is a man’s world. But it would be nothing, nothing. Without a woman or a girl.” Nice song. Strong sentiment. It got louder. Louder.

Then I stopped mid judgement, we elected a female president but it is still a man’s world. Leaders like Hillary Clinton and Bhandari herself know this. They were both once big supporters of their husbands. Hillary stayed behind Bill amidst many of his antics, granted he was a good president but he was also a womanizing d**t b** who couldn’t keep it in his pants. Many times this cost him votes. A respected feminist would be up an over this situation ditching the dirt bag when she could. But Hillary did not, she knew It was a man’s world, she knew at that point in time women were still not given the support they rightfully deserved. She did what a politician would waited it out, created a name for her through Bill. Why you ask? Why did a educated woman like her did not leave her husband? Simple. She needed the support, the campaign strength Bill and the presence of Bill.

Disclaimer: This does not mean that you stay with your cheating husband or boyfriend. You leave that dirt bag faster than I attempt to  pronouce something french . Hilary is the only exception.

The world changed, Hillary grew stronger. She waited for her time, and now the world waits for her. If we were to be true critics, how demeaning of her as a “Woman Leader” to stick with a cheating husband right? Just like with Bhandari how can a feminist leader  support such a law.

However, we forget we are in Nepal where development is slow, and political leaders change like season ko tarkari (seasonal vegetables). Bhandari probably experienced the intensity of being in a man’s world harder than others. In a place where most of her many competitors supported the anti woman law, could she have won if she was pro woman in every way? Also, if we gave every other person who was SLC fail and claimed to know how to run a country a chance, what makes us question a woman who has served most of her life as a politician and does not have anything sketchy to her credit apart from her statement.

“Whether we agree with it or not, in Eastern culture and tradition, a woman is entirely devoted to a man,” and“This may be a discriminatory system, but our society has always functioned this way”

Mind you she still vows to encourage woman’s involvement in the parliament with 1/3 quota for woman. A change as big as equality does not happen in a day, so I am going to give this one a wait and see.

Abraham Lincoln by right ended slavery, but racism still lives on. Similarly, pining all our hope in one person is not sufficient. It is something that needs to practiced everywhere.

Your Passion Will Not Please You. Not Always.

I have written many posts on passion or the rather on the redundant and over used titles of “Do what you love”.

Chronicles of Kathmandu: Hint It starts with Hyakkk and ends with a Thu

Chronicles of Kathmandu“So what’s Nepal like?”, “It’s quite amazing actually the mountains the fresh air, something

There is nothing wrong with having a bad habit here and there. As long as it does not consume your life and you still know

You have Successfully Subscribed!